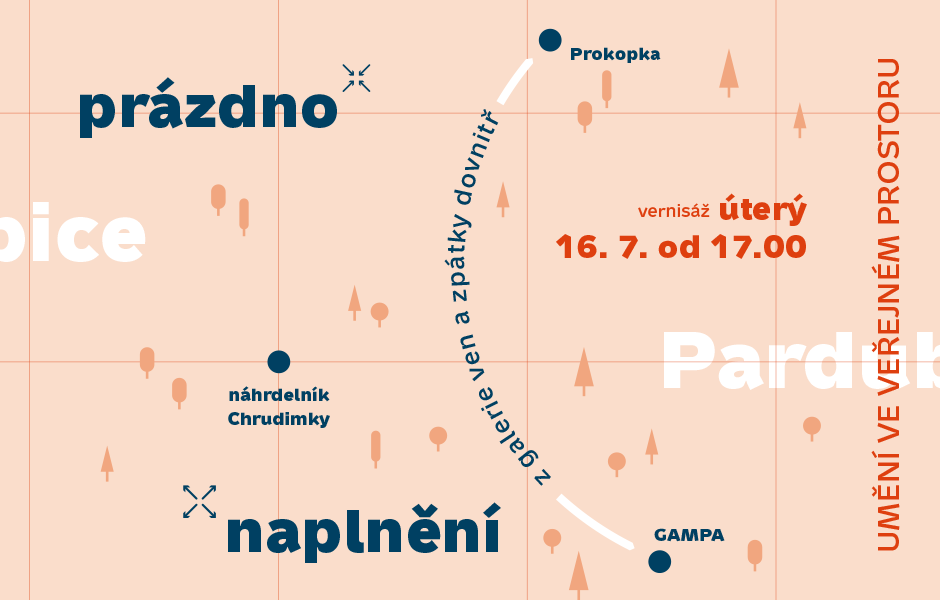 An exhibition as an experiment and dialogue with urban space. Out of the gallery and back again.
July 16 – October 13, 2019 / Opening: July 16, 2019, 5pm
Curators: Ondřej Teplý, Šárka Zahálková
www.prazdno-naplneni.cz

Searching for urban voids, sooner or later we arrive at the fact that its essence lies in a personal feeling. We tend to find empty spaces difficult to label – strange, pointedly avoided locations; these are forgotten places or locations waiting for a new function and use. The fact that they rest outside our anthropocentric perspective, however, does not mean that their existence is without meaning and content. These locations provide a shelter for wildness, a drop of chaos in the order of the city – partially or entirely unkempt greenery, animals, people experiencing homelessness – what we don’t want to see in the organism of the city and what we consciously or unconsciously overlook.

As part of GAMPA’s year-long exhibition programme, we consider and convey in the language of contemporary art various perspectives on the term resilience, in other words the capacity of an individual, society, or ecosystem to realise, react to, and overcome crises. The first exhibition of the cycle (Plastic Heart) pointed to the highly topical ecological impact of plastics and ocean pollution. The preceding installation (Ředění soust; Diluting Mouthfuls) then moved us from a global problem to the individual and their capacity – in today’s unending avalanche of perception – to stop and concentrate. The current project then explores the urban context, analyses apparent emptiness, and on the case study of a specific area, considers the role and significance of site, whether in the sense of city-building, memory, environment, or philosophy. A resilient city is aware of the fragility and vulnerability of its systems and the relationships into which it enters; it behaves viably, functionally, and sustainably.

The public space is not only created by matter – houses, streets, squares, parks, or other places and nooks, but also by social interactions – the intangible and yet so present and forming. A sense of emptiness thus doesn’t always come with the absence of the physical, but with the absence of a space for creating mutual unions and relationships with a site. One excellent tool with which to discover the hidden potential of sites, to their complementation, co-creation, or extension of meanings, is art. But only if its composition into public space is approached consciously and with deliberation.

The artworks temporarily placed around the Chrudimka river – near Vinice and at the so-called Červeňák – search for the possibilities and strengths of this area, relating to highly topical global and regional topics tied to issues of water, urban nature, sustainability, infrastructure, as well as the fragility and transience of time, states, and things. These original works communicate through a sensitive and open dialogue with the watercourse, the urban wild, and history. Not all of them are visible and accessible at first sight and first try. One must sharpen one’s senses, pick up one’s courage and walk out consciously.

With both Void and Repletion, we make space for unusual views of reality, helping to create a platform for enduring and conscious work with art for public space. This is how we understand the role of a city gallery.